In the parsha this week, we set up the Jewish Judicial System. One similarity between the US and the ancient Israelite judicial systems is that EVERYBODY is equal. No man or woman is preferred over another. This seems like nothing to my generation because its been taught, but for an ancient civilization this was a huge feat. Woman were pretty equal in ancient Egypt because they got into power,but to get their power they usually murdered their brothers. Cleopatra had to "love" Caesar and Anthony just for power. In Greece, women were depicted as beautiful in mythology, but had NO rights. Rome, women were pictured as maids, chefs, and nannies. Although in ancient Israel, if you were a man you were punished, if you were a woman you were punished. WOMEN are in the Torah. We do not just have Adam, Cain, Abel, Abraham, Issac,Jacob and Moses. We have Eve, Sarah, Rebbecca, Leah, Rachel, and Miriam. God is not sexist. Why do we live in a sexist world?
Written by Adam at 5/30/2009 10:38:00 AM No comments:

As I start the book of Numbers, I realize it is the least known book of the Torah. Almost everyone knows Genesis and Exodus. Leviticus is well known too and Deuteronomy is just a review of it all. Is it really about numbers? Instead of trying to get one of my own points or interpretations across, my first goal will be to get the point of the story across.

We start in the desert. Israelites are traveling for only the second out of forty years. We now have all the laws written and all at Sinai is the past. God commands Moses to take a census of the sons of Israel, but not the Levites. Levites are the nobles of the Israelites.

Why is it that the under 2000 Levites rule of the 74,000 Judahs. Is that right? Slaves outnumbered the Spartans in ancient Greece. 2% of Ancient Rome was the Roman Elite. We don't call it Levitism. It is Judaism.

One thing I like about Ancient Israel is money does not rule everything. The sign of nobility in Biblical times was to guard the tabernacle. Similar to my beliefs, the Israelites believed that there was nothing more important than being true to God. You could be the sneakiest, dealer on Wall Street, but getting that money leaves out time for family and religion. No Torah or Avodah and the world can not stand. This dealer definitely had to do something in order to get his money and from what I know it is not always fair in the finacial world. Torah, Avodah, and Gemulit Hasadim (Torah, Worship, and Acts of Love and Kindness) is what the world stands on. To conclude, we may be in a cracked economy, but when you lose faith (this includes being with your family) we live in a cracked world. We hold the puzzle pieces.
Written by Adam at 5/20/2009 07:04:00 PM 1 comment: 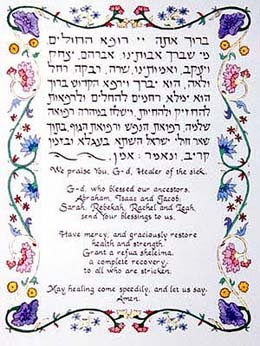 Hi Everyone,
My grandma is going in for a serious surgery tommorrow and I just wanted to say I love you grandma.

"Mi Sheberach"
May the One who blessed our ancestors, Sarah and Abraham, Rebecca and Isaac, Leah, Rachel and Jacob bless all the ill among us. Grant insight to those who bring healing, courage and faith to those who are sick, and love and strength to all of us. God, let Your spirit rest upon all who are ill and comfort us. May we soon know a time of complete healing, a healing of the body and a healing of the spirit, and let us say, Amen.
If you know how to comment, please comment amen.
If not, just please say amen or email me at agraubart@msn.com and I will let my grandma know.
I love you grandma. Good luck!
Written by Adam at 5/18/2009 03:04:00 PM 2 comments:

Another week of double trouble. Two portions one week! What I will do is interpret each parsha and then do both.


Behar- In this portion, God finishes his decree of laws. The people are just about in Israel when God says this phrase and I love it. It sums up Judaism.


This basically says the Sh'ma which is one of Judaism's most beloved prayers and that said you have one God. This says you can not have other gods. If there is one thing I can say about Judaism it is this. The principal of one God. We may have gotten into trouble (Story of Purim http://www.chabad.org/holidays/purim/article_cdo/aid/645995/jewish/The-Basic-Purim-Story.htm) Basically, we will not bow even to the highest king. A Jew's highest king is God. My follow up is "Why does God put the second commandment as we enter ancient Israel?"


Bechukotai- In this portion, God says the consequences of not following his laws. Throughout, Leviticus each law had its own consequence, but the overall laws have a group of consequences. Now, I do not follow every Jewish law, but as a good Jew I try to follow some. I have never killed, but also I have tried to ease my way into Kosher. Being Kosher are the Jewish food laws. I have given up shrimp because I don't like them. Even though I am on the tip of the iceberg, it feels fantastic to following a law.


I was reading the portion this week, and some consequences seemed familiar. Although, I know what they are I am not going to say them, but anyone can read the parsha here
http://www.chabad.org/parshah/torahreading.asp?AID=15585&p=complete
You can tell me the ways Jews have been punished that are in Leviticus parsha Bechukotai. Leviticus does not end like this though. It ends with these are the laws Moses was given on Mount Sinai. That is where the book of Numbers comes up.

This parsha tells of 6 holidays. Although some people would say 5. The 5 people would say are Rosh Hashana, Yom Kippur, Sukkot, Passover, and Shavout. I also count Shabbat. The debate I had this week was if Shabbat was a holiday or a commandment. I truly enjoy Shabbat and take it as a holiday, but technically it is our fourth commandment.


My parents always tell me never do something I will not put my mind to. Honestly, I give Orthodox Jews a TON of credit because I could never live that life style. I could never put my mind to it to be that strict and somewhere in my strict lifestyle I would stop enjoying Shabbat. I am not trying to say Orthodox Jews are too strict, but too strict for me. My parents also always tell me stick with your comfort level.

I do think it is important to celebrate Shabbat. I know that when you have fun with Shabbat you do it more often. I enjoy Shabbat and take it as a holiday. Let me know your opinion!
Written by Adam at 5/07/2009 06:47:00 AM No comments:

Torah Portion of the Week

Adam
With aspirations of serving as a Reform rabbi, I strive to merge a nuanced understanding of policy and critical theory with Jewish practice to mobilize communities for social change. I graduated from George Washington University in May 2019 with a Bachelor of Arts in Human Services and Social Justice and minors in Judaic Studies and Hebrew. In July 2020, I will continue my studies in the Rabbinic Program at Hebrew Union College-Jewish Institute of Religion. Inspired by my childhood rabbi, I started this blog in 2009, reflecting on Torah, Jewish customs, literature, and current events. In my spare time, I enjoy cooking, reading, running, exploring new places, and watching Yankees' baseball.